Code 3 Films is a New Jersey Limited Liability Company that prides itself in producing quality films at any budget. Based in Absecon New Jersey, Code 3 also has offices is Los Angeles, California.

Jim Klock and Darrell Martinelli started Code 3 Films to adapt to the changing needs of their growing production business. The two began their collaboration when Darrell joined Jim’s flourishing company Southern Gentlemen Productions. Jim and Darrell have been producing films together since 2005. They have produced numerous short films, documentaries, training videos, television pilots and Three feature films including Murder Eleven, which is currently being distributed by Indican Pictures and is widely available through Amazon.com and Red Box. They are experienced in all areas of film making from concept to screen. They can help bring your project to life regardless of your budget. They write, direct and produce their own stories that are steeped in the tradition of their law enforcement backgrounds, telling stories that are founded in their police experiences. This experience brings a realism to these films that is unparalleled. The two however have experience producing films in all genres such documentaries like America’s Elite, or the Comedy Television Pilot “Family Pizzeria TV” and their recent horror film “Massacre on Aisle 12”. Jim and Darrell bring hard work, dedication and integrity to every project they are involved in, they pride themselves in finishing all of their projects on time and on budget.

Jim has had much success producing such films as “Trials of Cate McCall” (2013) starring Kate Beckinsale and Nick Nolte and “There’s Always Woodstock” (2014) with Katey Sagal and Brittany Snow. He also produced “Trace” and “the Chosen” as an executive for Terror Films. Carrying over his law enforcement expertise into filmmaking, he co-created the TV Pilot “JUMPOUTS” (2014). In addition to directing several feature films, including “Riverguard” (2014) and “Massacre on Aisle 12”, he wrote and directed Murder Eleven (2013), distributed by Indican Pictures. Jim also created the Funny or Die series “Interrogations Gone Wrong” that he produces, directs, and stars in with guest stars such as Keanu Reeves. Jim is an acclaimed actor who most recently starred opposite Keanu Reeves and Renee Zellweger in “The Whole Truth” (2015) and “American Ultra” with Jessie Eisenberg and Kristen Stewart. He recurred on the ABC hit show “The Astronaut Wives Club” and will be seen recurring this year as Detective Chisolm on the new Fox series “Scream Queens” with Jaime Lee Curtis and Emma Roberts.

He believes that great filmmaking begins with great story telling. Writing great stories with interesting original characters, and bringing them to life on screen is what Jim does best. As a writer, Jim primarily writes about what he knows; police work. He wrote and directed the acclaimed the feature film “Murder Eleven” in 2011 and the  short “Gone Too Far” which won Best Crime Short at the 2008 Los Angeles Digital Film Festival. He brings what few can bring to police scripts, years of practical experience working in some of the most dangerous police units. He has written and directed numerous short films as well as the feature film “My Turn”. Jim incorporates real people and real events into all of his scripts. He pulls from all of the real life experiences he had throughout his fourteen year police career, and the stories and people who have touched his life during that time. Jim has written a television series called “Decoy” of which he directed the pilot episode. The series explores the workings of an elite yet controversial police unit.

Jim holds a Bachelor of Science Degree in Criminal Justice with a minor in Theatre. Jim is trained and has worked in all areas of law enforcement. He is an expert in police tactics and experienced in SWAT and hostage negotiations. A former detective who is experienced in crime scene processing and evidence collection. He is a lead instructor in the areas of Narcotics Investigation, Surveillance and Counter Surveillance Techniques, and close quarter combat.

Besides handling the business affairs of the company Darrell excels behind the camera. He is an accomplished Cinematographer and has been 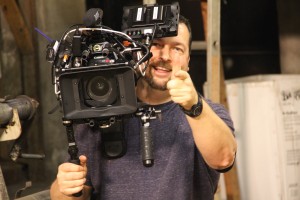 the Director of Photography on many of their projects. He serves as Jim’s Creative producer on films that Jim directs as he helps make sure that Jim’s vision is capture on camera. Darrell holds a Bachelor of Arts Degree in Criminal Justice with a minor in Film Production from the Richard Stockton College of NJ, and a Juris Doctor Degree from Rutgers School of Law Camden.

Darrell served as a police officer in Maryland, the District of Columbia, and Virginia. He graduated first in his class at the Northern Virginia Criminal Justice Academy and the Metro Transit Police Academy. During his law enforcement career he was a Recruit Training Officer, was part of Special Operations and was assigned to the Community Support Division. Darrell also acted as a court liaison in areas of asset forfeiture and domestic violence, where he would teach proper policy and report writing. Darrell was a technology expert and helped integrate lap top computers and computer aided dispatch into the police cruisers in the department. He established a training program teaching new officers 4th Amendment law and application.

Jim and Darrell met when the two became partners together in a major police department in the Metropolitan DC area.Darrell and Jim had been friends and colleagues for several years but when they were partnered together in the department’s elite Community Support Division it changed their lives forever paving the way for Code 3 Films. While partnered together Jim and Darrell were assigned to police two of the City’s toughest low income neighborhoods. During this time the two men not only became great partners but great friends. During their time as partners the two were among the most active, and productive officers on the department leading to many commendations and awards and a wealth of experience and stories; stories the two try to tell now through their films.

It is easy to see why Jim and Darrell’s work together has been highly praised. It is hard to imagine finding any two people as knowledgeable and passionate about law enforcement and film making, and the combination makes them truly unique. The two bring the same level of integrity to their productions as they did serving as police officers. They create an open and honest atmosphere on all of their productions; and the actors, crew, and all others working on the production are accepted as part of a sacred family, much like the law enforcement community.